Are you wrestling with the wintery doldrums or suffering from post-holiday blues? We have some news that will bring light to your day. 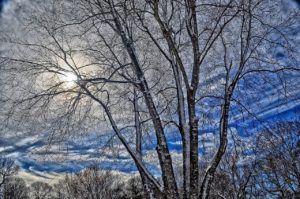 Cold, sunny weather can be ideal for producing solar electric energy! In fact, some of the coldest parts of our planet have great potential to generate solar power.

It sounds counter-intuitive, but cold weather can increase the efficiency of solar electric systems. This is because solar panels work when electrons in photovoltaic cells become shocked into a higher energy state by light energy.

According to UCSB ScienceLine, when it’s cold outside light energy generates more power than it does in hot weather. Electrons in cold climates are at rest or at a low energy state and when the sun strikes them, they become excited. The difference between their rest and excited states is the voltage that you get from your solar electric system. Electrons ensconced by warm weather have higher rest states and thus produce less voltage.

Acoording to AccuWeather, solar panels can even withstand the blustery snow provided that they are installed at an angle and the powdered stuff isn’t piled up too high. All solar panels are designed to bear a certain amount of weight and undergo pressure tests to assess durability and quality. Panels with higher pressure ratings are better at withstanding the weight of snow.

Snow, too, can boost your solar electric system’s productivity. It can act as a mirror against the sun, increasing the light collected in photovoltaic cells.

AccuWeather offers some valuable tips for homeowners who have a solar electric system who live in snowy climes:

February, March, April and May can be some of the best solar electric production months of the year and when it’s time to turn your AC on, your system may have accumulated a bank of energy credits which means you could be paying pennies for your retreat from the summer heat. Check out this great read about the benefits of investing in solar in the winter months.

The Challenges and Opportunities of SolarCity’s Quest to Offer a Solar Roof
October 26, 2016

Tips for Choosing a Contractor
August 1, 2016